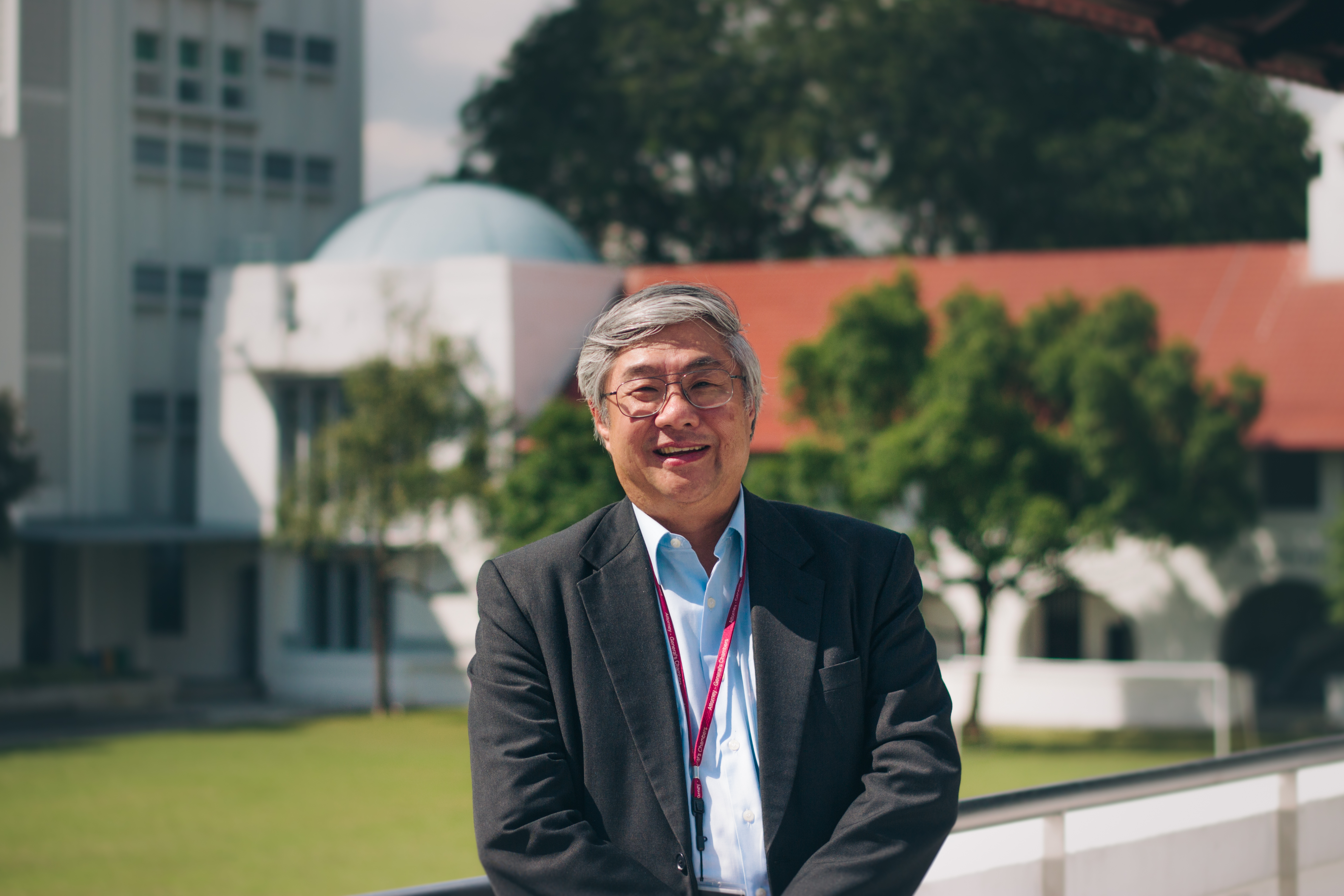 Professor Woon’s office is packed — full of books, trophies, pictures, shelves, and just about everything. He sits comfortably, in his office chair, framed by the row of books (some, his own), arranged neatly. Behind the area where he works there is an alcove — as all staff offices do — with windows looking out to the Gardens. Situated there is an armchair, draped with blankets, sitting on a rug. He invites us in, and mentions not to close the door.

Professor Woon is much quieter, speaking in his own office than he is in his seminars. While talking to us he’s often leaned back into his chair, with his hands clasped together on his desk. We are seated opposite him – two students on comfortable swivel chairs and the last one on a backless stool.

“Prof Woon – what do you do in your free time? We want to know more about you outside a professional capacity.”

“Oh, I paint that stuff, and I collect that stuff.” He gestures to the shelf next to his desk, drawing our attention to the figurines displayed in plastic cases – among them is a jeweled elephant, a few dancing statues, a small figure of an Asian man and military figurines. “No not the elephant, the elephant was a gift. The dancers were a gift and erm, Oda Nobunaga who is sitting down there I bought. But the rest er, yeah, that’s what I do, and then I write. Mm.” 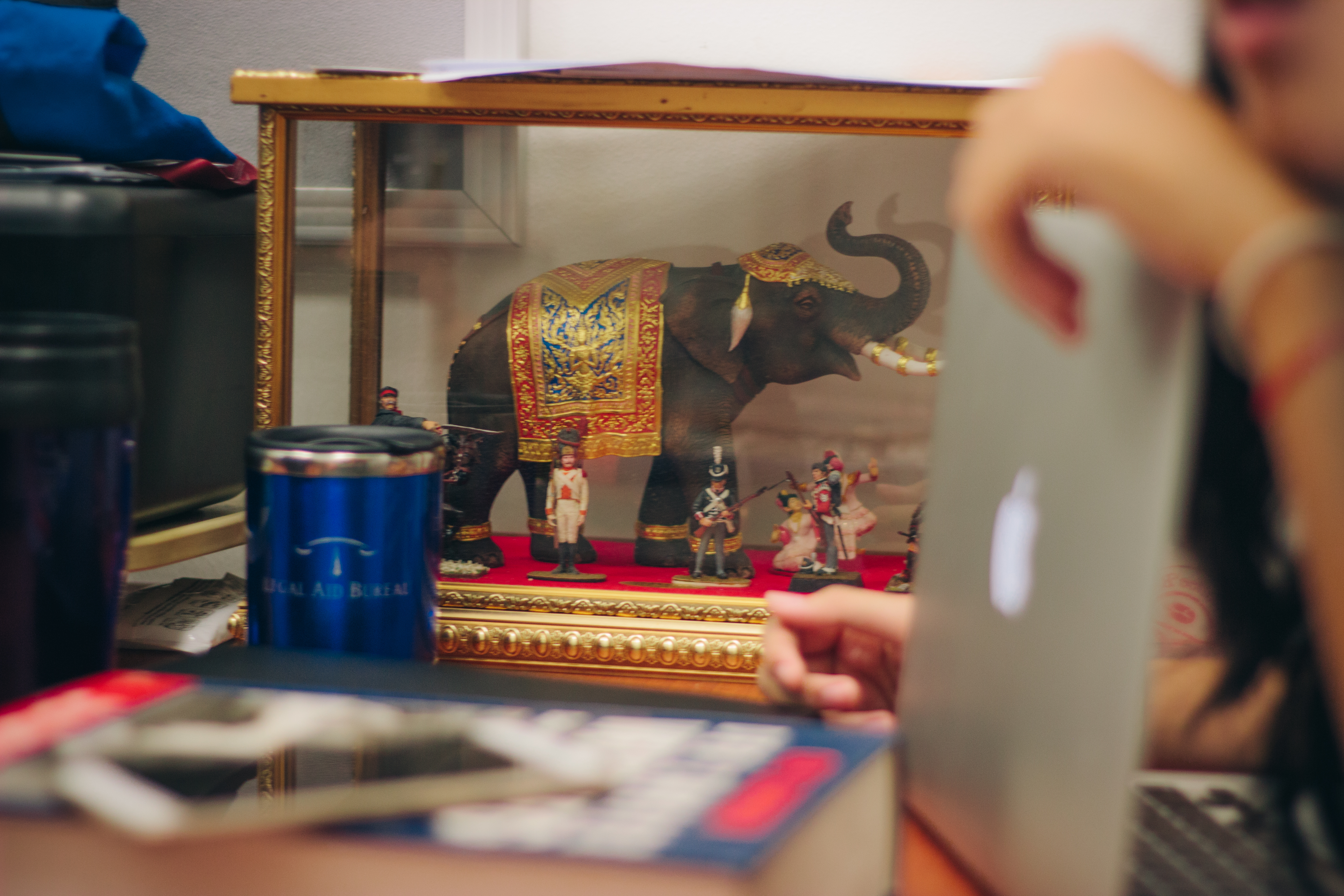 We notice now that these figurines are everywhere, dotted around his office in display cases on the shelf, and some sitting behind his computer on his desk. Along with them are four novels that he has written also. He explains he buys the figurines, white and uncoloured, and then paints them using acrylic. He buys them from Games Workshop, and mentions how they’ve redone the Warhammer series. Without his explanation we wouldn’t have ever reached the conclusion that he was the one who painted them.

“How long did it take for you to paint like, one of these figurines?”

“Before… it’ll take me a week, nowadays with my eyes, I take a lot longer.”

He reaches to his shelf and pulls out a box — numbered, part of a collection — and pops it open. Inside the opened and yellowed blister packaging reveals several silver figurines, and he picks one up to show us. “NazgÃ»l,” he says, nonchalantly referencing the dark wraiths from Lord of the Rings. “As you can see I’ve not tried to do any of this.” An unpainted silver figurine clatters onto the desk as he picks up the other. “That’s odd. There should be three NazgÃ»l,” he mumbles, looking into the empty box. “It seems the last one’s gone AWOL.”

“I mean, I’ve been doing this since, I think, even before I entered university,” he laughs. “It’s been a long time.” He shoves the box back together with its companions, on the shelf that’s been stuffed to its limits. “This is only here because my house was rebuilding, and now it’s too much trouble to bring it home.” 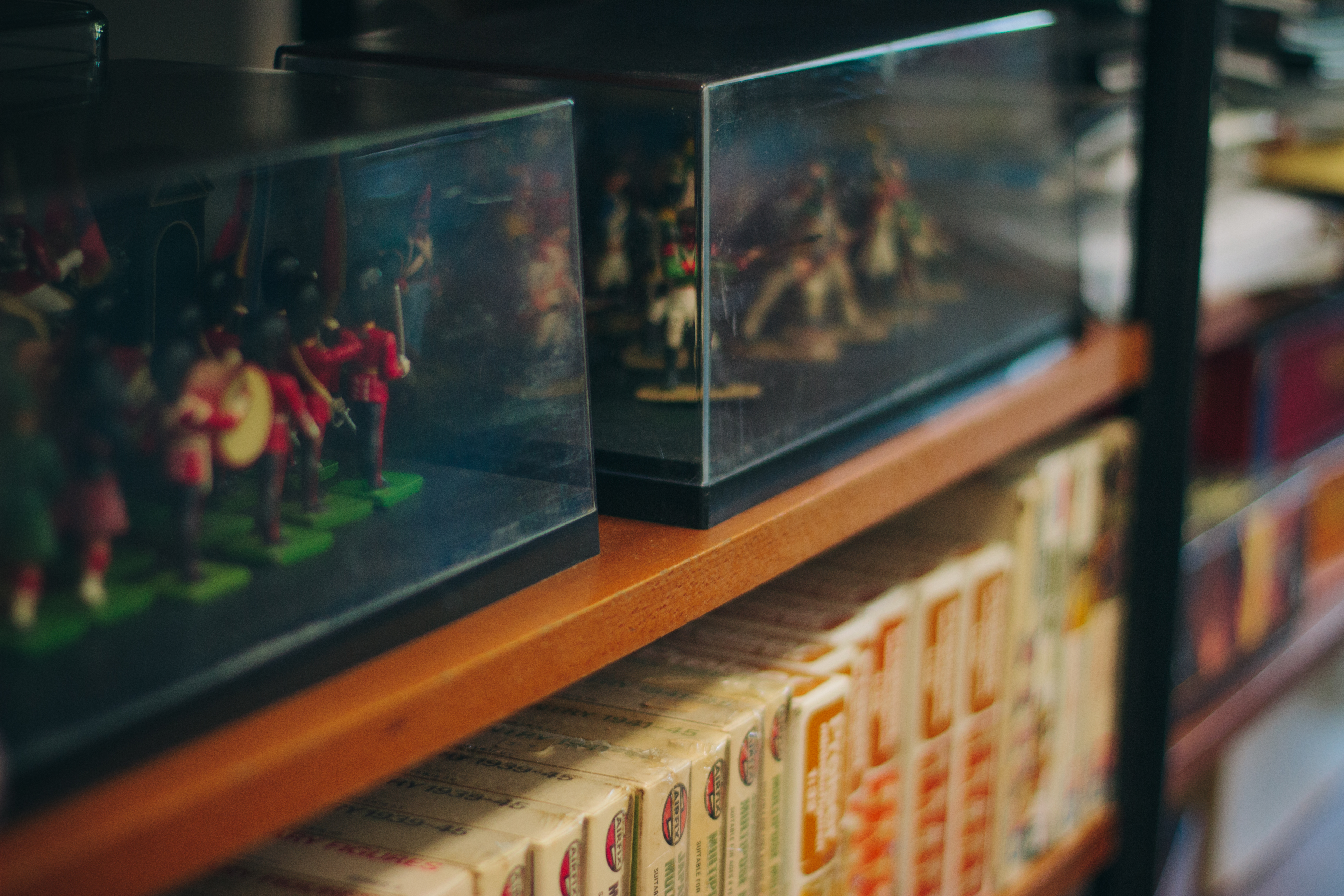 We ask him what he did when he was younger – his CCAs in JC, university, things like that (apart from figurine-related matters, of course). He recites his old leadership roles off the top his head: in JC he was the Chairman of the Literary Debating Cultural Society, Secretary of Museum, and Chief Editor of the newspaper. In University, he was the president of the class, Law Club, and an award-winning debater. “During orientation week I won the freshman oratorical contest because I didn’t participate in the orientation, er, the Raffles Hall one. I opted out because at that time they had this orientation, which is basically ragging. After that first bad experience I basically just devoted my energies to Law Club.” (He clarifies later that his stay at Raffles Hall was part of the terms of his scholarship.) “I don’t know if they’ve still got my trophy. They used to display it but I don’t know where it is now.” If you find his trophy, please drop us a message, so we can drop him a message.

Intrigued by his storytelling, we prod him more on his university residence matters. “As I said, the orientation was basically ragging. So after the first night, I said, look, I’m not doing this anymore.” He mentions that as a result of this, he was boycotted, not that it mattered to him, he just did his own thing.  “Later on, Tan Lee Meng – [at the time] a resident fellow and my first friend – he came to me and said don’t worry about this, you can just go ahead.”

Professor Tan would soon be promoted to master of the hall, and Professor Woon would take over as resident fellow of Raffles Hall, RH3. He would then stay there for several years, together with his wife. Upon mention of his wife, we question him on more romantic matters – however, Professor Woon was pretty private, revealing only the information below, and leaving a long, tenuous silence, which awkwardness crept in to fill.

Further questions about his university life lead us to discover how different things were while he was schooling. “In those days some of the students could barely speak! There was Chinese, and even Malay stream, and there were also the science students who’d get great grades.” He clarifies, though, that straight A students are a modern occurrence, “Even President Scholars would not get straight As, that was unheard of.”

According to Professor Woon, the failure rate back then was 10%, maybe even 20%. Of his class of 70, there were four dropouts – five, if you count the person who passed the re-examination – and he emphasises on how the quality’s increased enormously over the years.“Nowadays, failures are practically unheard of. Unless you’ve got some sort of psychological or medical problem, you won’t fail.”

Law, at the time, was considered a dumping ground for people who couldn’t get into Arts courses, which is a definite change to how things are now. The professors during his time were less engaged – though there were good ones – and there were only lectures, no tutorials. “Your generation’s so talented,” he says firmly, ignoring our frowns as our CAPs float into our minds. “Now you have to be at the top 95th percentile, and that’s why I tell you – you lot are top 5%, you know! Don’t get discouraged.”

As the interview progresses, we are eased slowly into conversing with Professor Woon, resembling less of the soliloquies he often has during his seminars. We talk about retirement (“I’m basically semi-retired”), practice (“I’ve given up all my public positions and given up practice”) and his bucketlist (“Retirement means you just get to do what you want to do.”).

“So are you doing the things you want to do?”

“Yeah, obviously. Well I chose to come back – all those years, all those years I was out of the faculty I kept my room I kept my email.” He turns around his chair, and makes a gesture to indicate his office space. “They used it as a storeroom, stuff they couldn’t find a home for they’d have just dumped it in my room! When I came back I had to dig through all the rubbish!” 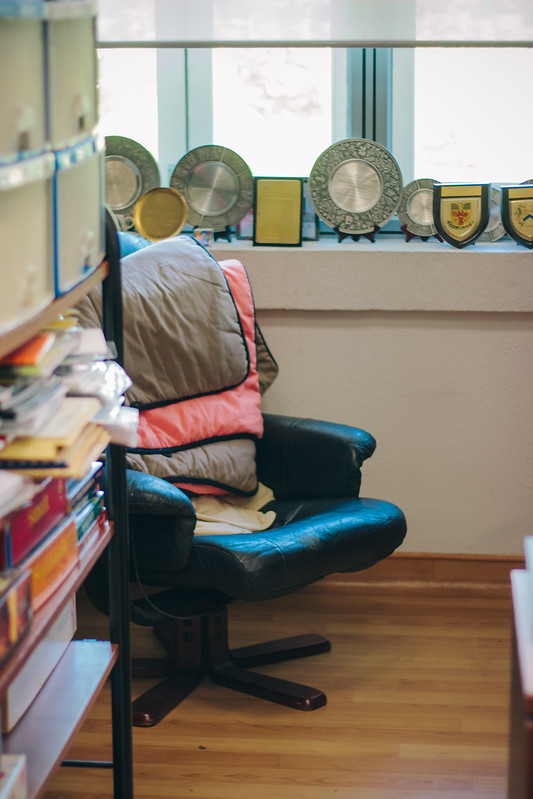 He leans back, sighs, and looks straight at us. “It’s nice to deal with people like yourselves. Because after awhile you get tired in dealing with cynical diplomats, and lawyers, and dealing with people who are not quite honest – it can be extremely tiring. To keep in touch with the young – it’s – it’s rejuvenating. And the other aspect of it is that we – we’ve got to be responsible and we as a profession, be responsible of training our own – we don’t do it, who’s gonna do it? That’s why I keep encouraging people like VK to come and join us. And he, he won’t. But I keep pushing these fellas to come and share – like Tommy Koh he should come back, tell, teach – but he doesn’t! And so all that experience – it just disappears. So apart from anything else, um, we are responsible for making sure the next generation functions – so that’s why I say when you go out and have a nice case you come and tell us. Spread it! (Sighs) Otherwise…”

He sits back, and noticing something on the same shelf where the figurines are displayed, he pulls out a thick sheet of cardboard. Then, he unfolds it, revealing it to be a large board game. Professor Woon then produces a small Ziploc bag full of coloured cardboard squares, and asks Valen if he recognises any of the symbols — he does (they’re army-related) — and reveals that it’s a military game. “Like Risk? Valen asks. He laughs at him. “No, no, not like Risk at all.”

“But what about life? How risky is it? Do you have any life tips for us?” Advice?”

Professor Woon pauses and thinks for a while. “Get a life outside! Go and do other stuff – hm? If all you know is the law, you might do well in exams, but you’re not gonna be a great human being. It’ll also make you a better lawyer in the long run – not necessarily by helping you directly in the exam, but because the really good lawyers are the ones who know things outside the law. If all you know is law, you’re a boring, boring person.”

We sit in quiet for a while, and then decide to ask him one of the final questions:  “What was your greatest challenge in life?” 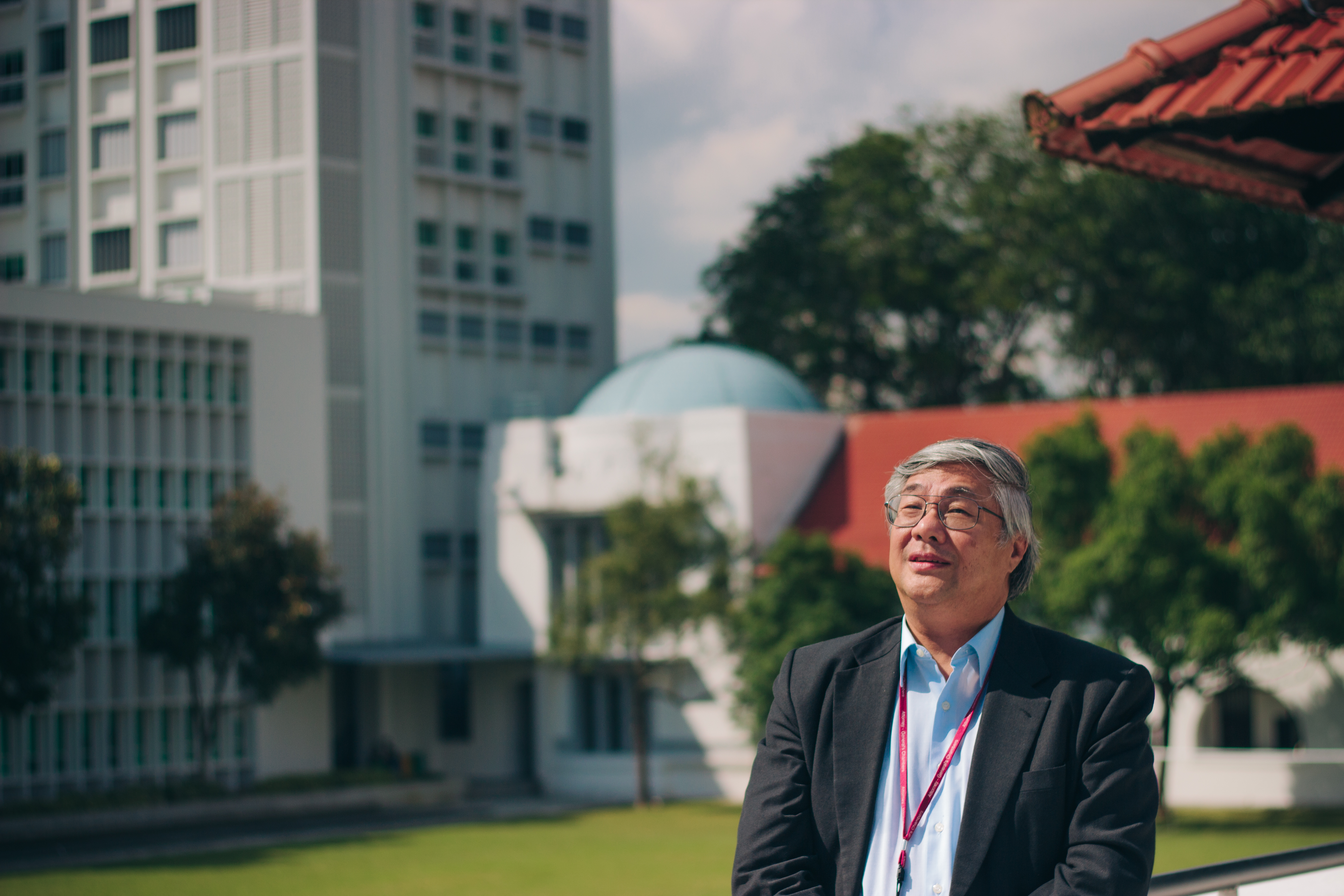 When the interview is over, Professor Woon takes us on a route that not many students have taken. He walks faster than his usual amble (because we, and him, were late for his seminar), bringing us through the offices, onto the roof, where we take his photo. On the roof, a plane passes and he makes a remark on the sound of the engine, showing us once again, his expansive military knowledge. After several more doors, and several more greetings and handshakes with important-looking people, he brings us through the staff room at Block B, and finally we emerge at the SR 3, where he begins his conducting an intense 3-hour long company law seminar without breaking a sweat.

Contemporaneous note: Regarding the title of this article, Prof Woon said (verbatim, while chuckling) “You can title it whatever you want. I won’t sue.” Thank you Prof Woon, you cool.