On the 7th to 14th January 2015, a team of 23 NUS Law students and two NUS Lecturers (Ms. Sheila N. Hayre, from NUS Law; and Ms. Rungnapa Kitiarsa, whom we affectionately call Ajarn Tukta, from NUS Centre of Language Studies) embarked on our first trip to Khon Kaen after a year and a half of planning. The project, Thai-ed With Love, formerly named Operation KKU, is an inaugural overseas Pro Bono project organized by NUS Pro Bono Group in collaboration with Khon Kaen University (“KKU”) Faculty of Law in Khon Kaen, Thailand. Seven students and a professor from Thammasat University (“TU”) were also invited to come down and join us all the way from Bangkok. Jointly organized by NUS, KKU and TU for the first time, the project’s ultimate aim is to improve the pro bono landscape in all the institutions involved.

To achieve the aforementioned goal, we adopted a two-pronged approach: the project aimed to raise awareness on the various issues plaguing Thailand / Khon Kaen, and the possible solutions in the form of student-led pro bono projects. NUS, KKU and TU students also worked together in two collaborative community legal education programmes targeting at at-risk youths and Thai migrant workers. These programmes served as a platform for the KKU and TU students to gain first-hands experience in doing pro bono work and for the students from the three institutions to exchange ideas and learn from each other directly.

Over the span of just 7 days (excluding 2 days for travelling), we executed six different activities with almost 250 participants in total. 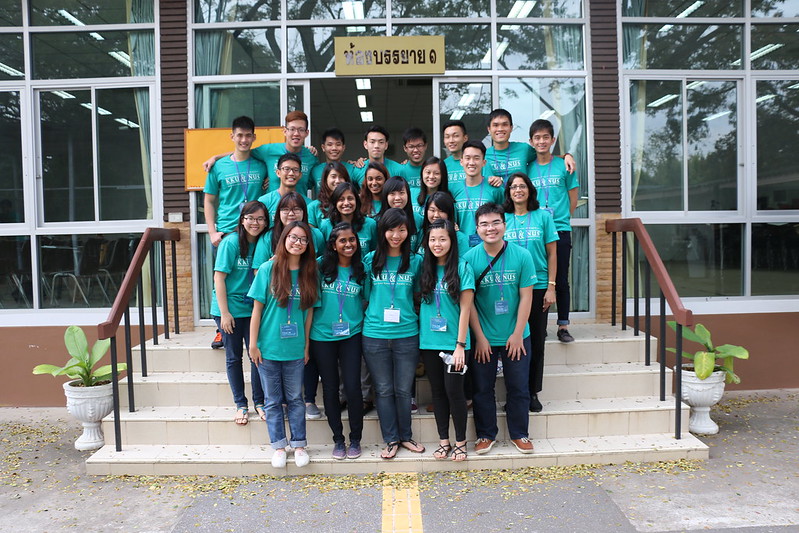 The first major programme on Thursday 8th January was Legal System Sharing, where students from both Singapore and Thailand shared about our legal systems, which served as an important stepping-stone for the later programmes. Interesting anecdotes and tidbits about the two systems were also shared (who would have known that long hair used to be illegal for Singaporean men?), which helped to break the ice and prepared us for the next intense session: the Pro Bono Marketplace.

The NUS students were split into three big groups of pro bono areas (Research, Clinical, Awareness), and the Thai students visited the three groups in turn. In each group, we conducted an in-depth sharing session about what the various universities have been doing in relation to Pro Bono, and brainstormed on possible pro bono initiatives the Thai students could embark on in future. Although neither KKU nor TU has a Pro Bono Group or an established pro bono programme, we had very lively and engaging discussions. The session ended off with two presentations from KKU and TU on the pro bono initiatives that they would want to embark on with the new insights gained from the Marketplace. It was so very heartening to see how much thought and passion everyone put into the brainstorming and presentation sessions, and we will definitely be checking back with KKU and TU on their progress. In fact, already at this point in time, we have heard from both the KKU and the TU students that they are working to establish their very own Pro Bono group! 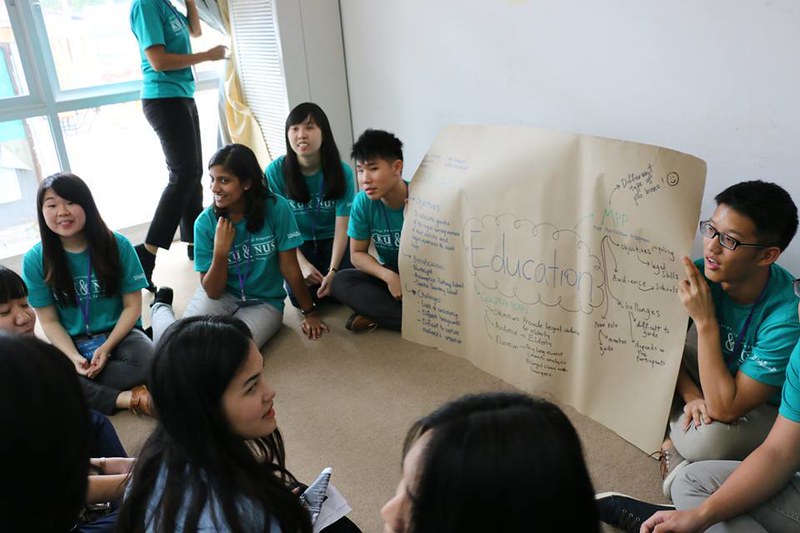 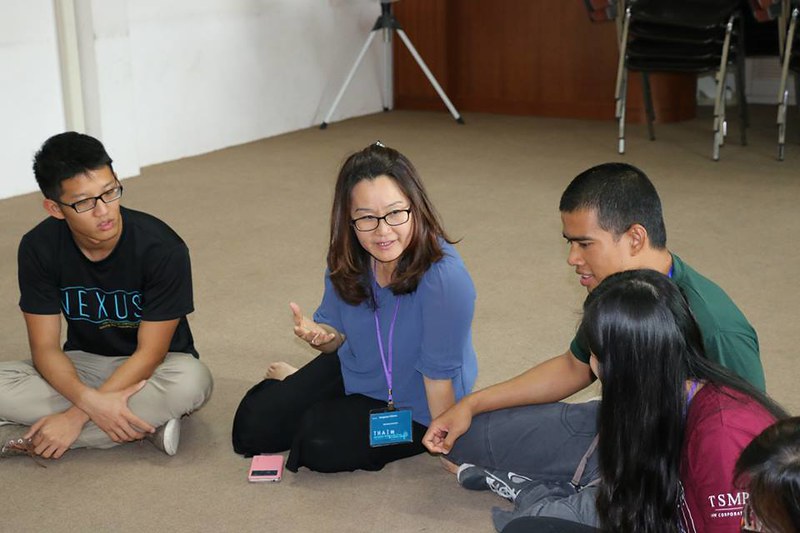 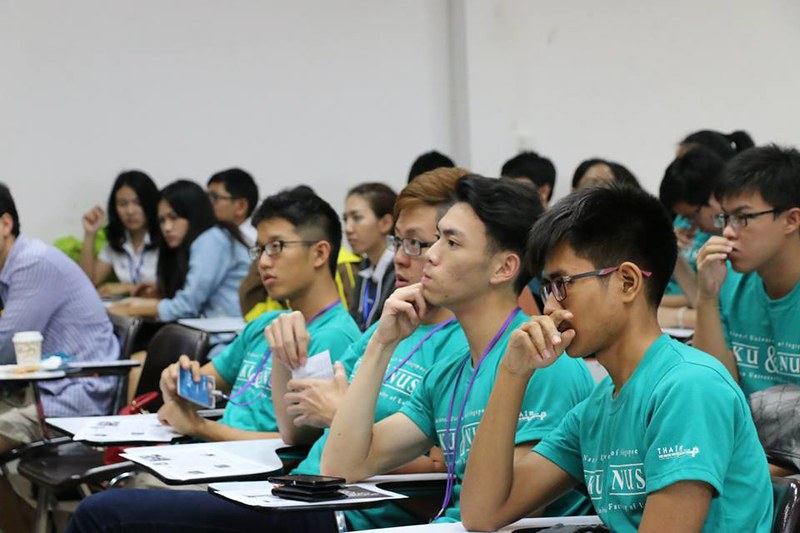 All fired up with the energy and insights gained from the first two programmes, we next embarked on the Social Issues Conference on Saturday 10th January. Experts from around the region were invited down to share with the students on certain issues that are plaguing Thailand / Khon Kaen and what law students can do about it. We invited two speakers from Foundation for Women, who spoke about human trafficking and domestic violence against foreign women; Mr Evan Yap, a Singaporean expert on education who has been living and teaching in Khon Kaen for years; as well as Mr Kovit Boonjear, a seasoned activist who works in land law and government-related issues. Several lawyers from Watson Farley & Williams (“WFW”), an international law firm with a Bangkok branch, also came down to help us facilitate the session. Very engaging discussions with the panelists ensued, with ideas and solutions bouncing around the room, and we all left the Conference feeling so much more informed and inspired for the days to come. 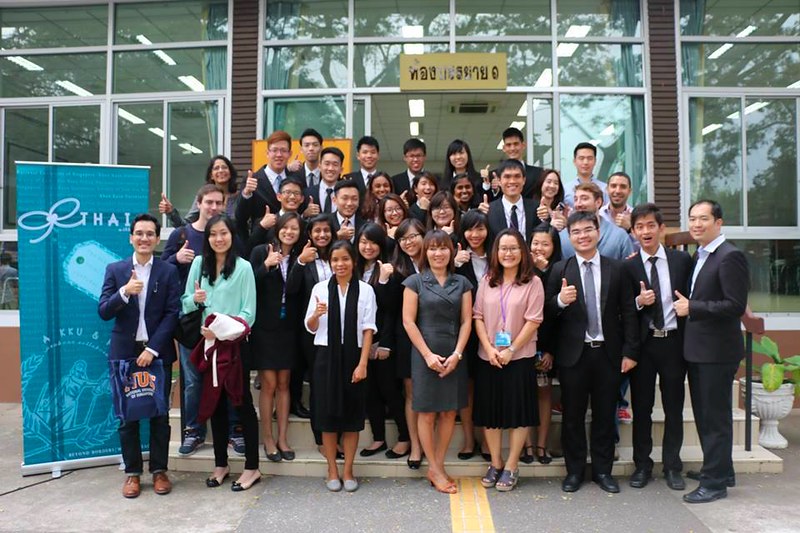 NUS Team with the Conference panelists and WFW lawyers

The following day was the Employment Law Seminar, which was targeted at Thai workers seeking to work in Singapore in construction or domestic jobs. In preparation for this, the NUS & KKU students produced a Singapore Employment Law booklet to be distributed to the workers. The TU students also prepared a skit on migrant worker issues as an engaging and realistic introduction to the session. However, we faced a lack of participants due to unforeseen circumstances. Not letting our efforts go to waste, we turned it into a “train-the-trainer” session, and carried out the full programme albeit to an audience of Thai students. The WFW lawyers also shared with the audience about their experiences in dealing with migrant worker issues, as well as in pro bono work in general. The responses received were positive, and we will be in touch with our Thai friends to figure out how they can reach the Thai workers in the future.

The next big programme on the following day was a visit to the slum areas next to a railway in Khon Kaen. Interestingly, this was situated in the middle of the city and right next to the the largest mall in Khon Kaen. The juxtaposition and income disparity came as a shock even to the Thai students, and was certainly an eye-opener. What was most impactful, however, was to see how the Thai people there were still so gracious and thankful despite their living conditions, even for the small gifts and daily necessaries that we bought for them. We left feeling a bit mellow, but also energised to do more for them in the next cycles of the project. 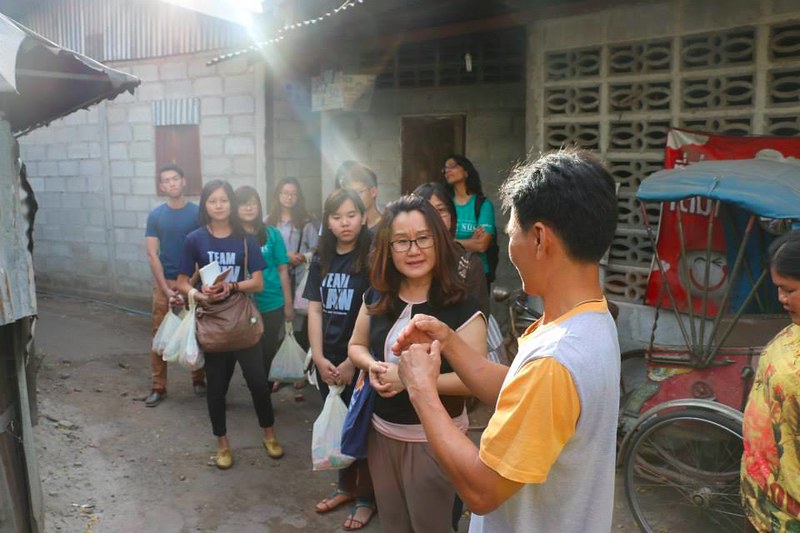 Ajarn Tukta talking to a villager in the railway village, with the NUS team carrying bags of daily necessities behind 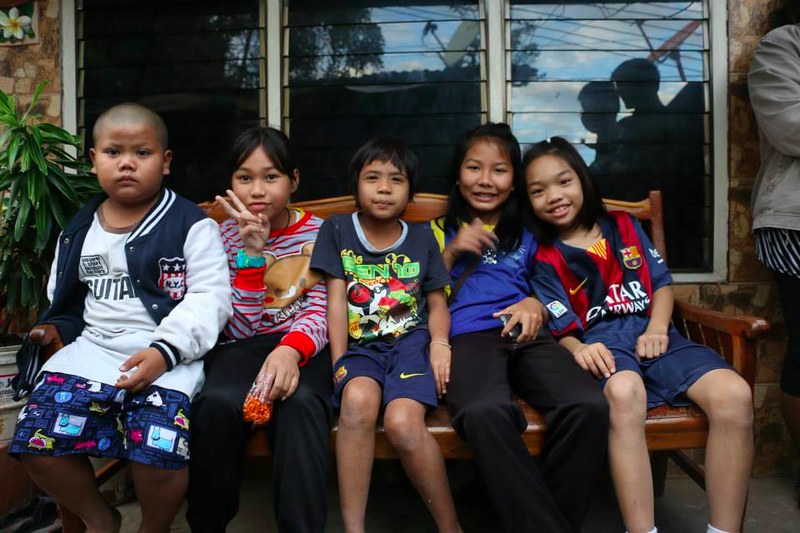 On the second-last day of the project, we carried out the final programme at the Khon Kaen Youth Institute, where we taught the youths at the institute on “Basic Rights” and “Domestic Violence”. Preparations were done during allocated timeslots throughout the previous days, which saw the NUS and KKU students brainstorming and crafting the entire programme together. On the day itself, we taught, played games and interacted with 80 boys who had been convicted of certain offences like drugs and rape but were too young to go to jail. Whatever preconceptions and misconceptions that we had of them were dispelled, and we were positively amazed by how enthusiastic and engaged the youths were. In NUS Pro Bono Group, we have a similar programme (Legal Education & Awareness Programme — which right now is targeted at children from disadvantaged families in Family Service Centres), and we hope that we can develop this NUS PBG programme with the new insights we have gained from our Thailand project! 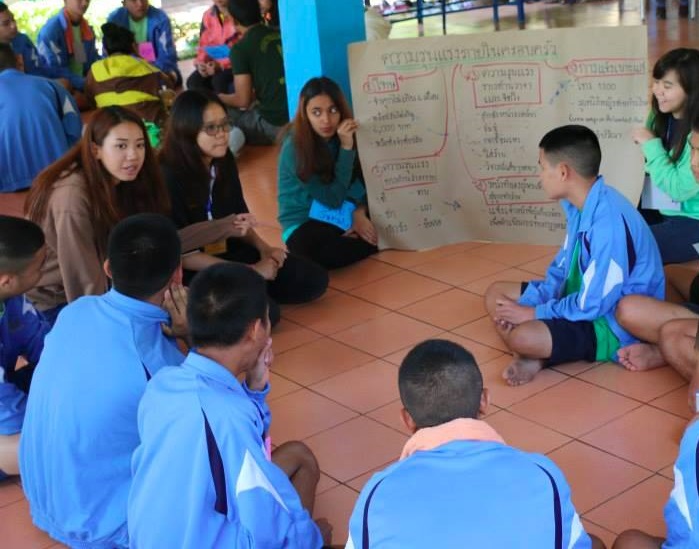 Hard at work when teaching about Domestic Violence

Of course, it was not all hard work and no play. In our free time throughout the trip, we also visited the Ubolratana Dam and the Wat Phra Phuttabat temple, and we roamed around the night markets almost every chance we got! 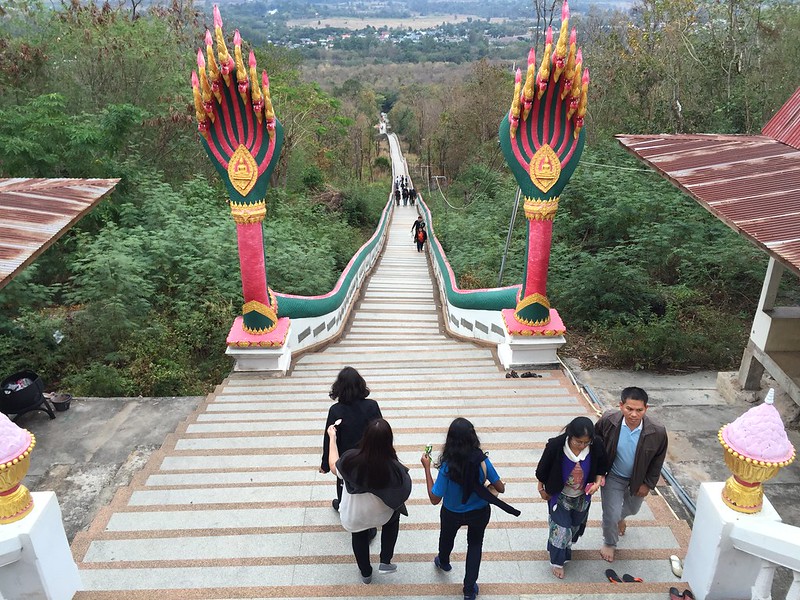 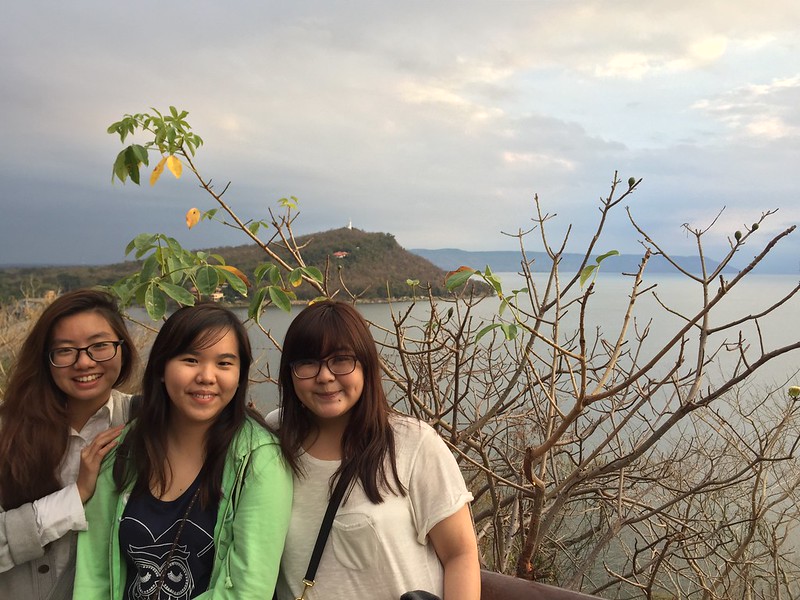 Amazing scenery at the Ubolratana Dam 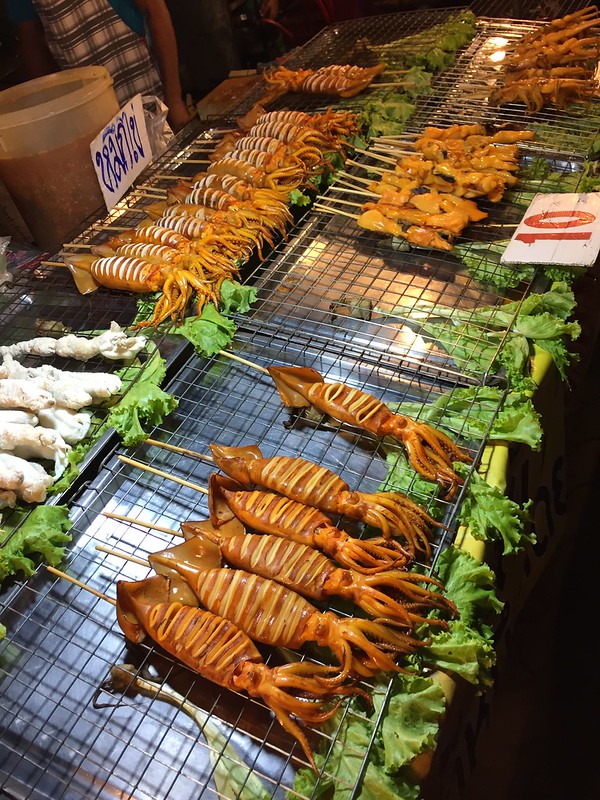 In fact, it was during these informal moments that we realised we had so much more to learn from the Thai’s: from knowing how to use the correct gender pronoun and mastering the “wai” posture (the bow), to their heart for service and their tenacity despite the infrastructural and institutional difficulties that obstruct their paths to pro bono work. The warmth and hospitality that they showed us, from arranging with the hotel to make sure that we had the optimal transport every day, to answering our every whim and food cravings (MANGO STICKY RICE?!) made this a journey not just of the mind, but also of the heart and soul. Seven days were a short time, but we forged lasting friendships with them through sincerity and the shared passion for service.

After more than one year of preparation, Thai-ed With Love has finally come to an end. Even though we have endured sleepless nights of researching and crafting programmes, months of uncertainties due to the political unrest in Thailand, and moments of great stress in trying to juggle school work with the project, at the end of the trip, all of us wished that we had more time to spend in Khon Kaen. One thing is certain: each and every participant in the project came out of it different. We are already in talks with the Thai students regarding next year’s projects, and all of us are excited about what is to come. Ultimately, we envision this to be a collaborative, sustainable conversation that will continue in future years; hopefully the first step towards establishing a cross-border dialogue on pro bono among students in the regional landscape. 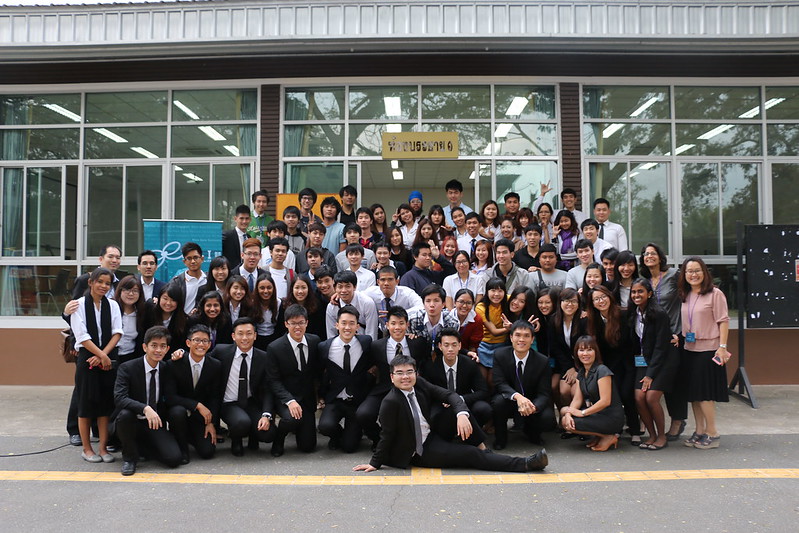 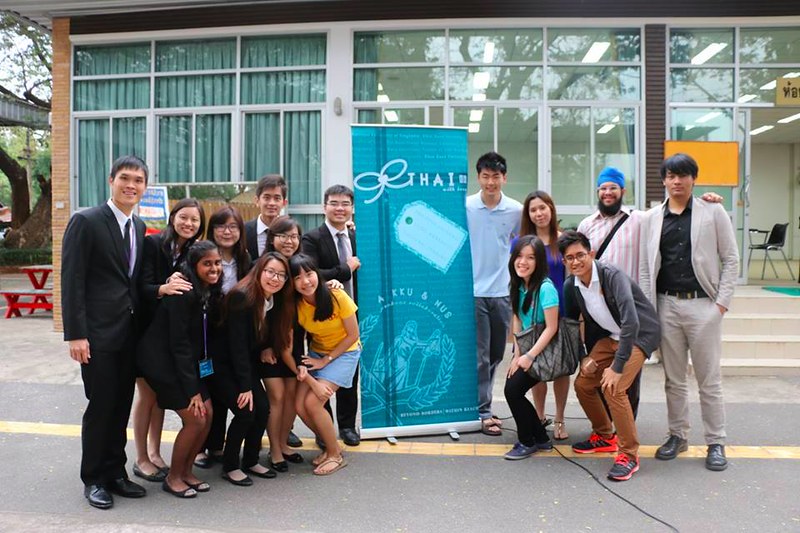 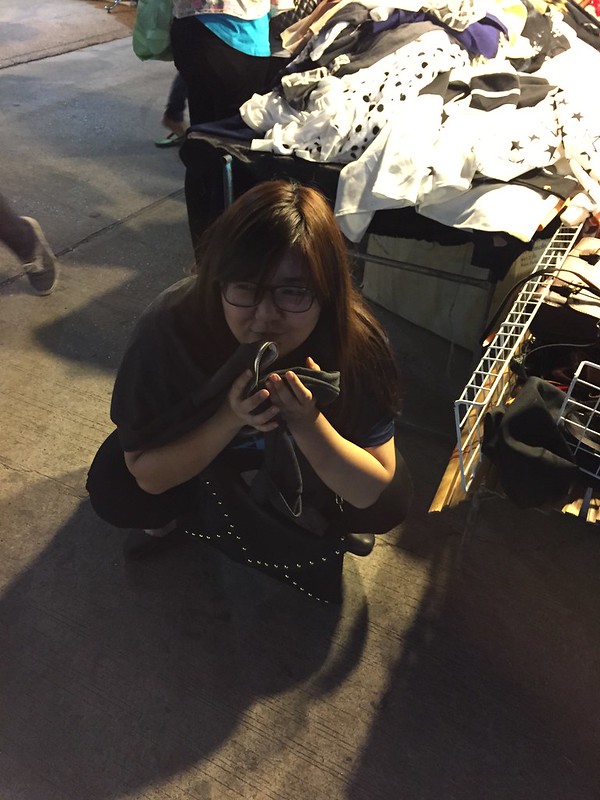 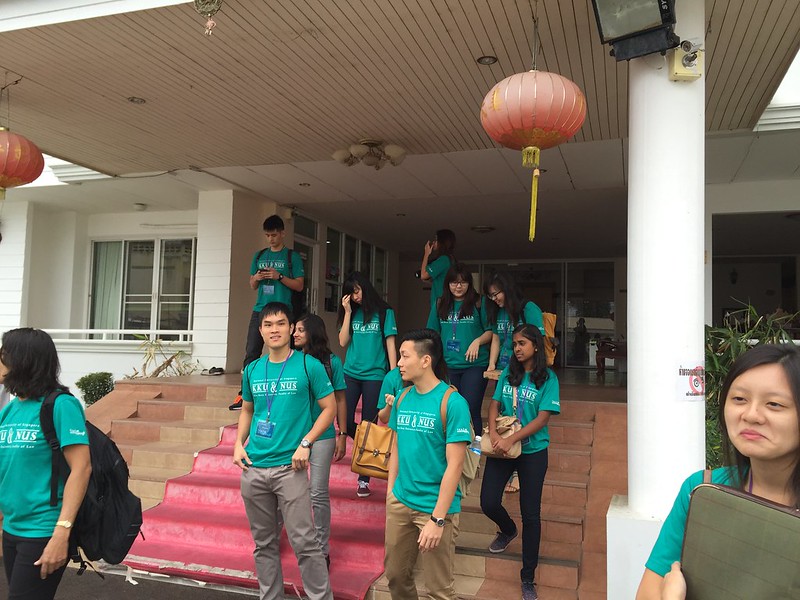 Xinyuan is not amused 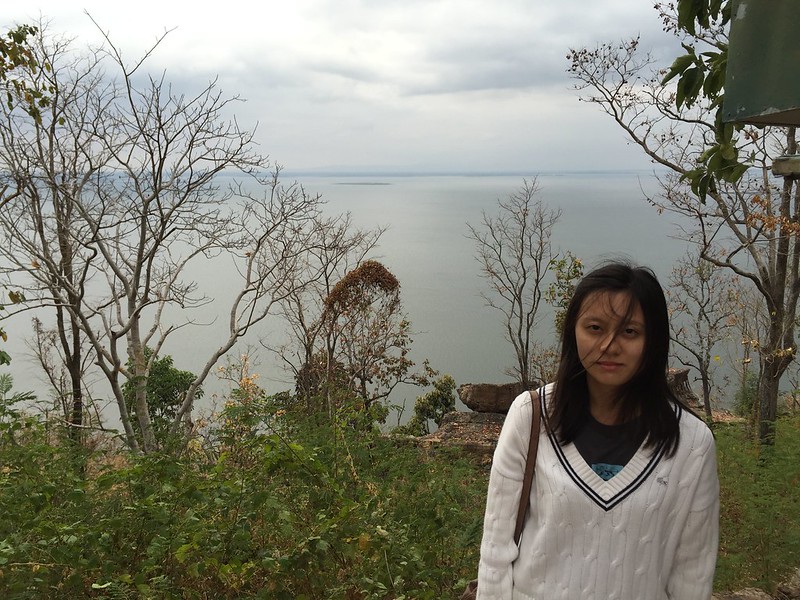 Xinyuan is not amused at all